Thanks to the commitment of its members and their local partners the two recent Association Latin American conferences were voted a great success by delegates, speakers and exhibitors. The Venezuelan event held in Caracas got off to a flying start with 200 delegates packed into the conference room to hear a broad selection of presentations from users and industry representatives. 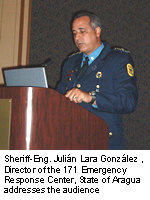 Local speakers added significantly to the conference agenda. The National Director for Civil Protection and Disaster Management from the country’s Interior and Justice Ministry, D. Antonio José Rivero, gave an overview of the challenges for TETRA in Co-ordinating Civil Protection Resources. Later on in the agenda, Sheriff-Eng. Julián Lara González, the Director of the 171 Emergency Response Center in the State of Aragua gave a very lively and entertaining presentation on 171 Emergency Response System Integration with a TETRA system. The points raised provoked many questions and lively discussion from the full conference room.

Industry speakers from members and their commercial partners in Venezuela addressed subjects covering security, APLS (Automatic Personnel Location Services) and data applications. They also described TETRA’s leading role at the heart of homeland security communications for the state of Monogas. Commercial opportunities were covered as well in an interesting evaluation of the opportunities for PAMR operators using TETRA networks in Venezuela.

All of the companies exhibiting at the event reported good interest and positive contacts at the event despite the attempts of the weather! Flooding after a major thunderstorm threatened to isolate the exhibition area as some of the area was indirectly open to the elements. However, there was no interruption to the delegates. A measure of the high level of interest was the large number of delegates remaining to hear the closing presentations at the end of the afternoon.

Moving on to Buenos Aires 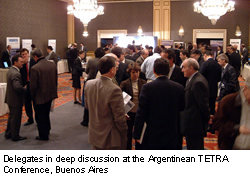 After an overnight flight to Argentina, the exhibitors and speakers prepared for the 1st Argentinean TETRA conference in Buenos Aires where almost 100 delegates were welcomed for a full day of presentations and an exhibition. A number of the speakers from the earlier event in Caracas were present and local content was added by Guillermo Calo, of the Barrick Gold Corporation who described their TETRA radio system high in the Andes and Adrian Nowik from Pan American Energy described the use of TETRA in their Oil and Gas operations. Delegates, speakers and exhibitors again reported a very positive response, spending all day at the event.

Both the Venezuelan and Argentinean TETRA conferences have been very well timed by giving access to a range of user and industry experts at a time when many in the region are actively engaged in research or enhancements for their new communication solutions. This deep interest was confirmed by the prolonged and active question and answer sessions at both events. The Association was delighted to receive many requests to repeat the Latin American conferences next year and is actively considering the possibilities to add the region to its 2006 conference and events programme. No firm plans have been decided but when next year’s global marketing and promotion calendar is decided, an announcement will be made in the Events section of the Association’s website at the start of 2006.