The original TETRA standard first envisaged in ETSI was known as the TETRA Voice plus Data (V+D) standard.  Because of the need to further evolve and enhance TETRA, the original V+D standard is now known as TETRA Release 1.  An overview of the network elements covered in the TETRA standard are shown in figure 1. 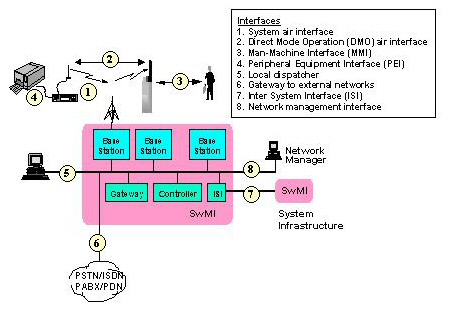 Switching and Management Infrastructure (SwMI)
The abbreviation SwMI is used to classify all of the equipment and sub-systems that comprise a TETRA network, including base stations.  Even though some ETSI Technical Committee (TC) TETRA members felt that a standard base station interface would be useful (as provided in GSM) it was decided that owing to the way in which different manufacturers configure their networks for optimum performance and design flexibility, it would be impractical to implement.

It was also agreed, for the same reasons as the base station interface, that everything contained inside the SwMI would not be standardised, thereby allowing TETRA infrastructure manufacturers flexibility in design, and the ability to differentiate their portfolio offerings, when in competition with other TETRA manufacturers.  This practical approach also meant that new technologies in the areas of transmission and networking could be used without having to go through a long standardization process.

Air Interfaces (1 & 2)
The most important (and complex) interfaces are considered to be the ‘air interfaces’ between the base station and radio terminals (1) and the Direct Mode Operation (DMO) interface (2). DMO is a facility that allows terminals to operate in local radio nets independent of the main TETRA network infrastructure.

Remote Dispatcher Interface (5)
This interface was originally intended to allow connection to remote wire line dispatcher consoles like those located in major control rooms.  Unfortunately, work on this interface was dropped in ETSI TC TETRA as the complexity to provide a universal interface without degrading performance was impractical.  This was because the PMR industry had specialist manufacturers of control room equipment, the majority of which differed in the way they interfaced to PMR networks.  Similarly, the TETRA network architecture of manufacturers also differed adding to the complexity of providing a universal interface. For these reasons only TETRA manufacturer specific interface specifications are available to support the many voice and data applications requiring access to TETRA infrastructures.

PSTN/ISDN/PABX (6)
This standardised interface enables TETRA to interface with the PSTN, the ISDN and/or a PABX.

Inter-System Interface (7)
This standardised Inter-System Interface (ISI) allows infrastructures supplied by different TETRA manufacturers to inter-operate with each other allowing interoperability between two or more networks.  There are two methods of interconnection in the standard, one covering information transfer using circuit mode and the other using packet mode.

Besides these network element standards, the many services and facilities available on TETRA are also standardised.  The most significant of these being:

Details of these services and facilities can be found in the V+D section.