DMO is the term used by the TETRA industry to describe the ability of TETRA radio terminals to communicate directly with each other (like ‘Walkie-Talkies’) independent of the Trunked Mode Operation (TMO) network. DMO is not new and has been a fundamental mode of operation by many traditional PMR user organisations for several decades.  The primary requirement for DMO in TETRA has been brought about by the need to balance the RF coverage, Grade of Service (GoS) and reliability of a network with that of the network’s overall cost. 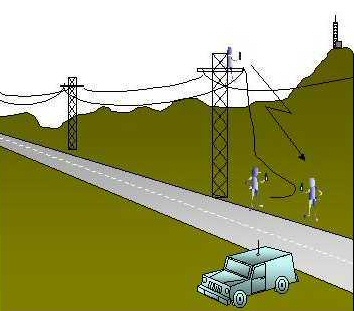 Figure 1 shows a team of Electricity Utility workers repairing a damaged overhead power cable, which is a typical application for local area DMO communications.  Because of the localised nature of the work, there is no need to load the main TMO network with localised voice traffic.  For this reason, the team has made the decision to operate in DMO.  Another contributing factor to this decision is that the team does not want to suffer GoS access problems when the TMO network is busy.  It could also be possible that RF coverage from the local base station site may not support handportable operation and therefore DMO would be the only form of communication.  For this type of local communications application a RF coverage range performance of approximately 250 metres is considered more than acceptable. 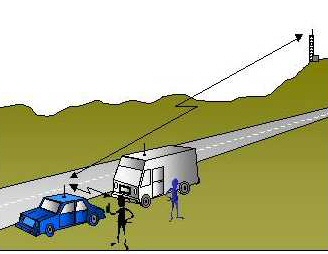 From Figure 2 it can be seen that a police officer has stopped a goods vehicle on a main highway running through the countryside where only mobile communications are supported.  In this example, the police officer needs to verify the vehicle registration, driving licence, and nature of goods carried.  For this purpose it is more efficient for the officer to use a handportable radio terminal for communications with the police control centre than it is walking backwards and forwards between the goods vehicle and his patrol car.  Also, having direct access to communications when away from the patrol car is important for the officer’s health and safety. Again, for this type of local communications application, a RF coverage range performance of approximately 250 metres is considered more than acceptable.

Communications between DMO and TMO users
As mentioned previously, communications between DMO and TMO users can be provided using DMO Gateways.  Although Gateways are normally used to extend TMO network coverage, they can also be used to link local area DMO communication nets into the TMO network when required.  This form of Gateway linking can be used independent of the type of RF coverage provided by the TMO network. Another form of providing communications between users operating in DMO and users operating in TMO is the use of a facility called ‘Dual Watch’ which, when enabled, periodically ‘listens out’ for calls on either DMO or TMO dependent on mode selected.  For example, if the mode of operation was DMO the radio terminal would listen out for calls on TMO and vice versa if the mode of operation was TMO. This Dual Watch facility can be provided on both handportable and mobile radio terminals.  Obviously, for Dual Watch to operate on handportable radio terminals, RF coverage would be required from the TMO network.

Enhanced local area DMO RF coverage performance
Even though DMO RF coverage performance is more than adequate for most applications, there are instances when RF coverage needs to be enhanced, for example in localised areas where there is a significant amount of building clutter over a relatively large area causing unacceptable signal losses.  In these instances, enhanced RF coverage can be provided by a ‘Repeater’ facility incorporated in a vehicle mounted TETRA mobile radio terminal, or a transportable radio unit, suitably located to provide the required area coverage.  For practical reasons, this ‘Repeater’ facility is only made available on mobile radio terminals.  Also, Repeaters can be provisioned with a Gateway facility to link DMO and TMO communications when necessary.

User Application Summary
From the application examples provided it can be seen that many traditional PMR user organisations will achieve economic benefits by using DMO without seriously compromising RF coverage, GoS and network reliability requirements.  From practical experience, the maximum RF coverage performance required for DMO is approximately 250 metres for most localised communication applications and 1 km for major incidents.