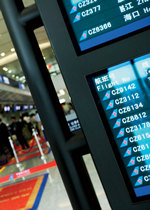 EADS has signed a framework cooperation agreement to establish a nationwide TETRA network for China’s airports.

The network, to be built for the Air Traffic Management Bureau (ATMB), Civil Aviation Administration of China (CAAC), will be the largest digital trunked radio network in China.

During the first phase of the project, a TETRA exchange centre will be set up in the international airports of Beijing Capital, Shanghai Pudong, Shanghai Hongqiao and Guangzhou Baiyun. The base stations in these four airports and the remote base station that has already been set up for the Chengdu airport will be connected to the switching centres, and will form the core of a large nationwide network in a unique hub system.