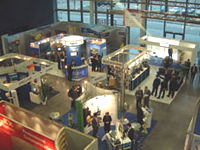 The Forum Messe in Frankfurt, Germany became the global activity centre for TETRA at the end of November 2005. Four days packed with seminars, conference presentations, exhibition booths and the opportunity to network with TETRA users, manufacturers and service suppliers brought delegates from all over the world to see and hear the latest TETRA news for themselves. Phil Godfrey, the Association’s Chairman was “delighted with the number of first time attendees to this year’s TWC – a very good sign for business in 2006.

Delegates had a full agenda of presentations and case studies to choose from, and the presence of a wide range of manufacturers of TETRA equipment, accessories as well as specialised services, was a positive reflection of TETRA’s worldwide presence and growth. The independent research consultancy IMS observed in its newsletter that there was a clear indication that a growing number of manufacturers believe that TETRA is a mobile radio technology with a major market potential. They also highlighted that the ‘mantra’ for TWC2005 was “data services and applications”.

Data applications were on display for markets ranging from transportation to public safety and from commercial to military. Handsets and mobile terminals are all data capable with displays and operational features designed to fully exploit TETRA’s data flexibility and capability. The number of companies promoting dedicated TETRA antenna solutions demonstrates that the market for accessories has also taken off.

With Germany well on the way through their decision process for the nation’s next Public Safety communications solution, the location of this year’s TWC was very appropriate. Not only did Hamburg’s Police Chief, Gunter Krebs open the whole event, a dedicated stream in German was part of the first afternoon’s proceedings. Chief Krebs graphically illustrated in his presentation how technology had advanced in every area. He emphasised that he is looking forward to benefiting from similar technology advances with the new modern, digital communication solution for Germany’s Public Safety organisations. 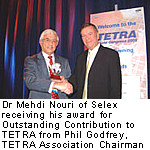 One of the highlights of the TWC’s programme is the Gala Evening and Awards, held in the palm-filled Wintergarden close to the Forum. This man-made paradise was quite a contrast to the icy winds outside, and the Deputy Mayor of Frankfurt contributed to the warm atmosphere inside the Wintergarden with her welcoming speech – identifying the significance of the World Congress, the TETRA business and the forthcoming opportunities in Germany. 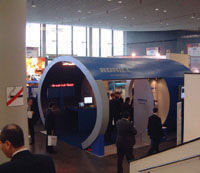 The Awards for the evening were presented by the Association’s Chairman, Phil Godfrey. First on stage was Hester Visser from Rohill to collect the best Exhibition Stand award. All the judges were impressed with the company’s combination of an innovative stand design and attentive stand personnel. The second award of the evening was the announcement of the Outstanding Contribution to TETRA for 2005. This year it went to Dr Mehdi Nouri of SELEX (previously known as Marconi). Mehdi is well known and respected for his TETRA knowledge and his long-standing contribution to developing the TETRA standard. Mehdi’s career has included time in the academic world as an Associate Professor and many commercial roles in SELEX Communications. As well as a number of publications to his credit, Mehdi’s TETRA contributions also include his long serving role as Chairman of the TC TETRA Working Group 4 more recently responsible for developing the TETRA Release 2 High Speed Data standard.