One of the greatest TETRA advocates 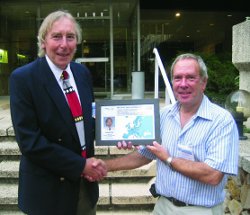 Doug Gray, one of the most popular people in the TETRA world, has retired as the Chairman of ETSI TC TETRA after over seven years in office. Doug was presented with a plaque by the Secretary of TC TETRA, Ken Oborne, at the October plenary meeting held at ETSI Headquarters in Sophia Antipolis.

Phil Godfrey, Chairman of the TETRA Association, was unable to attend but sent the following message which was read out at the meeting: “It has been a real pleasure to work with you on the establishment of TETRA going right back to the early 1990s. There is no doubt in my mind that you have made a significant contribution to the success of TETRA worldwide over many years. You are recognised as an expert in TETRA and one of its greatest advocates. It has been my pleasure to work with you over those years and I wish you a long and happy retirement.”

Elected to replace Doug is Reinhard Whaelen, sponsored by Motorola Gmbh. Doug is retiring after being diagnosed with advanced prostate cancer earlier this year. To help increase awareness of prostate cancer, Doug, has set up his own website: www.loveyourprostate.co.uk Doug has also written a book which is available for purchase on the web site – all profits from the book will be used to provide greater awareness of the symptoms and risks of prostate cancer.