Munich 2009 – an overview of this year’s TETRA World Congress 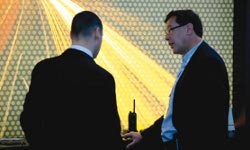 The 2009 TETRA World Congress, held at Munich’s ICM, attracted a record number of visitors, with over 2,500 people talking TETRA during the week. Many of those visitors passed through Munich Airport, which currently welcomes around 38 million people a year – a figure forecast to grow by 20 million over the next five years. The airport’s TETRA system, supplied by Motorola, has 1700 users, responsible for apron and airport control, terminal services, ground handling and facilities management, among others.

Motorola hosted 15 local and international journalists who visited the airport control tower and had a live demonstration of the TETRA system. Tom Davies, event director of the Congress organiser IIR, said: “This year’s TWC was an outstandingly successful event despite the economic climate, and has shown the solid strength of the TETRA market.”

“On behalf of everyone here at Samdale I would like to say a big thank you for arranging a great show in Munich! We felt that everything ran very smoothly and that the show was a great success. The mix of companies exhibiting and the quality of delegates who attended provided a busy few days for us on our stand. We look forward to working with you all again for next year’s show in Singapore!” Samdale

“Thank you IIR for a well organised TWC. Will see you in Singapore!” MCS Digital

“As a first time exhibitor, I wanted to thank you all for the great work and collaboration in the days towards the event. It was a great success for us –  with lots of visitors. We already look forward to next year’s event.” Kolibri Systems