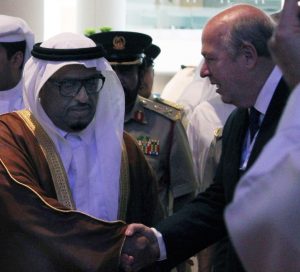 14 November 2016: The Middle East and Africa (MEA) will experience the fastest rate of digitization in the world according to analysts IHS Markit. Shipments of LTE technologies* increased by more than 300 per cent in 2015, and the MEA region is projected to be one of the world’s fastest growth markets for TETRA critical communications technology

Led by TETRA, the MEA PMR market was the fastest growth market globally in 2015, with shipments into the region increasing by 30 per cent. TETRA shipments more than doubled in 2015, accounting for 29 per cent of total shipments and significantly eroding the analogue installed base.

These statistics were underlined by the success of the TCCA’s fourth Critical Communications Middle East and Africa event, which takes place each year in Dubai. “Once again this region has demonstrated its innovation and ability to translate critical communications concepts into reality,” said Phil Kidner, TCCA CEO.

“The MEA region has been an early adopter of LTE technologies. However most networks have been used as a complementary data service to existing narrowband systems, and it will take some time before LTE is rolled out for critical communications voice.”

The UAE has announced its intention to reserve sections of the 700MHz and 800 MHz spectrum for broadband services, which is expected to promote migration to public safety organisations onto LTE technologies. Qatar has already built its own public safety LTE network with commercial LTE equipment in the 800 MHz band, while maintaining its existing TETRA network for critical communications. In Saudi Arabia, national operator Bravo has announced plans to replace proprietary technology with TETRA and LTE.

*incorporated within other technology by IHS