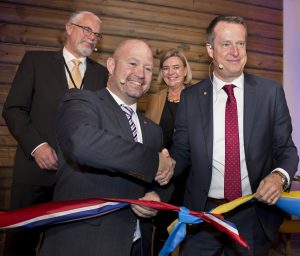 On 16 November, the field exercise between Norwegian and Swedish first responders took place at the border crossing of the European route E14 between Meråker (Norway) and Storlien (Sweden). The exercise impressively demonstrated cross-border communications between the different TETRA networks Nødnett (Norway) and Rakel (Sweden). Frequentis delivered its latest ICCS 3020 software update to support cross-border voice and data services within the control centres.

The Norwegian-Swedish Inter-System Interface (ISI) project establishes cross-border communications for public safety agencies and will allow the emergency services to communicate and interact across nations. The control centre software change to support cross-border functionality has been delivered and accepted during 2016, and is ready to be deployed by the agencies in 2017.

The experiences from this project are a major milestone for the Inter System Interoperability for Tetra-TetraPol Networks project (ISITEP); an EU-funded initiative that develops procedures, technology and legal arrangements to achieve a cost effective global solution for Public Protection & Disaster Relief interoperability.

Anders Anundsen, the Norwegian Minister of Justice and Public Security, and Anders Ygeman, the Swedish Minister for Home Affairs, witnessed the exercise. Helena Lindberg, General Director at MSB (the Swedish Civil Contingencies Agency), and Tor Helge Lyngstøl, Director at DNK (the Norwegian Directorate for Emergency Communication), signed the formal contract for network use and operations.

“As responsible agency for Nødnett, DNK are proud to take part in the work that can become a standard for other European countries in the future. We have long considered functionality for cross-border communication as a natural part of Nødnett, and it is very gratifying to see it in action”, says Tor Helge Lyngstøl, Director DNK.

“With the Frequentis software update we make all workflows and voice and data services available, including domestic and foreign resources, while supporting control centre operators with an effective and user-friendly communication control system. It allows seamless management of cross-border collaboration during crises and disaster management situations. Features include international talk groups and flagging foreign radio terminals on the graphical user interface”, Robert Nitsch, Director Public Safety at Frequentis, explains the Frequentis services for ISI.