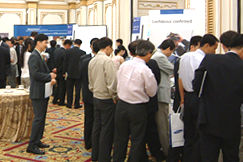 Returning to South Korea after a successful inaugural event in 2004, the Association held its second TETRA Conference and Exhibition in Seoul, at the end of June. The 2005 event exceeded the high expectations of all concerned and resulted in the liveliest and most interactive one day TETRA conference yet to be held by the Association. The local interest in TETRA is very high – reflected by the large turnout of some 200 delegates at the event. Particular topics of interest for the audience were the Inter System Interface (ISI) and Security, both of which are highly significant in South Korea as their agencies investigate all the options for the implementation of a national Government Radio Network.

Conference opening from the Korean Regulatory organisation
Mr Eung Bae Kim from the Korean Regulator, TTA, gave delegates an up-to-date report on the national situation with TETRA now standardised in South Korea using the ETSI specifications as the basis of the standardisation. Another local speaker and MoU Member, Mr YoungWan Lee, Managing Director of Airtech I & C gave a fascinating review of the history of trunked radio services in South Korea and how this is influencing the future shape of the services. Jaekung Lee of Rohde and Schwarz Korea presented a variety of military TETRA applications. 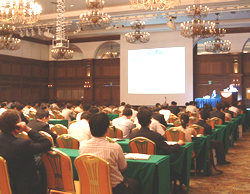 Interactivity increased further between speakers and delegates following the presentation given by Mr Maarten Tijssens, CEO of TetraNed, the company responsible for implementing the C2000 Public Safety network in the Netherlands. He presented a detailed insight into experiences gained and lessons learned in Europe implementing Government Radio Networks, prompting many questions from the audience. A similar level of response followed the presentation by Jari Juvonen from the Emergency Response Centre in Finland. His discussion of the integration of public safety control rooms in a TETRA environment was highly relevant to the local audience. The programme was supported by both MoU vice chairmen and board member Charly Hengevoss. The Association’s CEO, John Cox, had been asked to give an update on the current situation with the ISI – a presentation that prompted a series of questions that took the session well over its scheduled time.

The ten exhibitors including local member Samsung Thales were all pleased with the number and quality of delegates resulting in a number of requests for the event to be repeated in 2006.