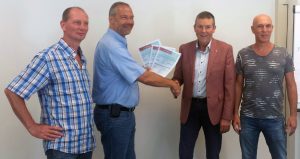 Hytera TETRA radios are officially CTK certified and with that approved for use in the Netherlands.

After Hytera got certified for the nationwide TETRA network SINE (national system for emergency service) in Denmark, Hytera TEA2-enabled TETRA radios are now also verified for use in the Netherlands. The Ministry for Security and Justice officially approved it with the so called CTK certificate (C2000 Toelatingskeuring, see picture).

The certification applies for the following TETRA radios in the Hytera portfolio: Z1p, PT580H Plus and MT680 Plus.

Apart from the more common features such as individual/group calls, status, text messaging and emergency calls, many more advanced features have been tested as part of the approval process, including air interface encryption, DMO gateway, fallback, subscriber class, DGNA and GPS.

Hauke Holm, Chief Technology Officer at Hytera Mobilfunk: “The successful certifications have shown that our products play a leading role in the critical communications market.”