TETRA continues to be adopted worldwide. The annual contract survey, completed in October 2005, lists over 788 infrastructure and terminal contracts awarded in 77 countries – a contract growth of 27 per cent compared to the 2004 survey. We take a look at some of the latest:

Argentina: Widely distributed network
Teltronic has supplied a widely-distributed TETRA network to REPSOL-YPF for its oil processing plants, and a TETRA network and two despatching centres to Damovo for the Ministry of Security in Neuquen Province.

Belgium: Firefighters select EADS
A special commission of fire fighters has selected EADS TETRA THR880i terminals, to be used within the scope of ASTRID, the countrywide Public Safety network in Belgium. The terminals are supplied by EADS distributor AEG Belgium, who will also provide configuration, installation and maintenance services.

Brazil: TETRA calls in Bahia
Teltronic will supply a TETRA system and call despatching centres to the Secretary of Public Safety of the state of Bahia. The Military, Civil and Scientific Polices and the Fire Brigades will share the system in the area formed by the capital city of Salvador, the city of Feira de Santana and the BR-30 highway between them.

China: Motorola wins Tianjin TETRA
Motorola has won a 12 million RMB Yuan (US$ 1.5 million) contract with the Tianjin Economic-Technological Development Area (TEDA) to deploy a TETRA-based Emergency Response Communication radio system under the Tianjin Government Radio Network (GRN). The system will be fully operational by the middle of this year.

Beijing Police choose Sepura
Sepura is supplying handheld and mobile TETRA radios to the Beijing municipal government for use by the Beijing police. The contract award was made possible by the joint efforts of Sepura’s partners in China, Beijing Sonicom and Beijing Yongxin Union Technology.

Ireland: TETRA for the Dublin force
After a public tender issued by the police, EADS Secure Networks has won the contract for the delivery of additional hand portable TETRA radios through its local distributor Radius Communication to the Irish police, An Garda Síochána, for its Dublin network.

BMW AG has chosen Sepura TETRA radios for its Test Tracks sites in Germany, Sweden and France, part of a complete digital mobile communication solution provided by 3T Communications AG – owned by Frequentis GmbH. The installation of the TETRA communications system was completed in November 2005.

T.On Telecom chooses TETRA
T.On Telecom is replacing its existing trunking radio network system with a TETRA digital radio system from Motorola – the first TETRA-based Public Access Mobile Radio network in Korea. The Dimetra IP-based Motorola infrastructure will include a network of more than 56 sites within the Seoul, Kyungki and Incheon areas. EADS has been chosen as the main terminal supplier.

The Netherlands: Largest terminal contract
Regio Politie Amsterdam-Amstelland (RPAA) has chosen THR880i radios from EADS for use in the C2000 network. The biggest terminal contract in the Netherlands, signed between RPAA and EADS distributor Zenitel, means that each field officer will have a personal THR880i radio. The deliveries commenced at the end of 2005 and will last into 2006.

Slovenia: TETRA protection
The Ministry of Interior of the Republic of Slovenia will use Sepura TETRA radios to protect the south European Schengen border. The contract win was made possible by 3Tech d.o.o., Sepura’s partner in Slovenia. 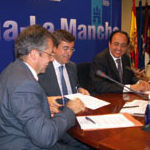 SELEX Communications and Soluziona have also supplied network and handsets to AENA (Aeropuertos Españoles y Navigacion Aerea), for Barajas airport in Madrid. AENA is the world’s biggest airport and air traffic control organisation, controlling 42 airports in Spain and several others overseas. The network will be managed by local operator Telecom Castilla La Mancha (TCLM), and will be used by more than 5,000 people.

Venezuela: Teltronic in Trujillo
Teltronic has been awarded the contract to supply a TETRA network to the Venezuelan State of Trujillo Police.